Skip to main content
Eurasian wigeons with color rings. Color ring project in Westwouderpolder / Krommenie Woudpolder.
From the winter season of 2015-2016, a color ringing project was started on Eurasian wigeons in the Westwouderpolder. In the winter of 2017-2018 we switched to the Krommenie Woudpolder, adjacent to the south side of the Westwouderpolder. This polder provided more optimal conditions (including less disturbance and more Wigeons, so better catches) and much better reading conditions.
The purpose of this color ringing campaign is, among other things, to get an idea of ​​the local site fidelity of the Wigeons, to record movements (both national and international) and to gain insight into partner loyalty.
All captured Wigeons are also sampled for avian flu viruses for research done by the Erasmus University in Rotterdam and a part for the zoonosis project of the NIOO.
Wigeons receive a metal ring from the Bird migration station and a color ring. This concerns a yellow ring with a letter-number combination (see photo), a yellow ring with a number-number combination, an orange ring with a number-number combination (see photo) or a white ring with a letter-letter combination. The ring is read from top to bottom.
Example of entries: A yellow color ring yellow T6 is entered as Y T6. So first the color Y (yellow), then a space and then the code (T6).

For the orange ring this will be O 56. 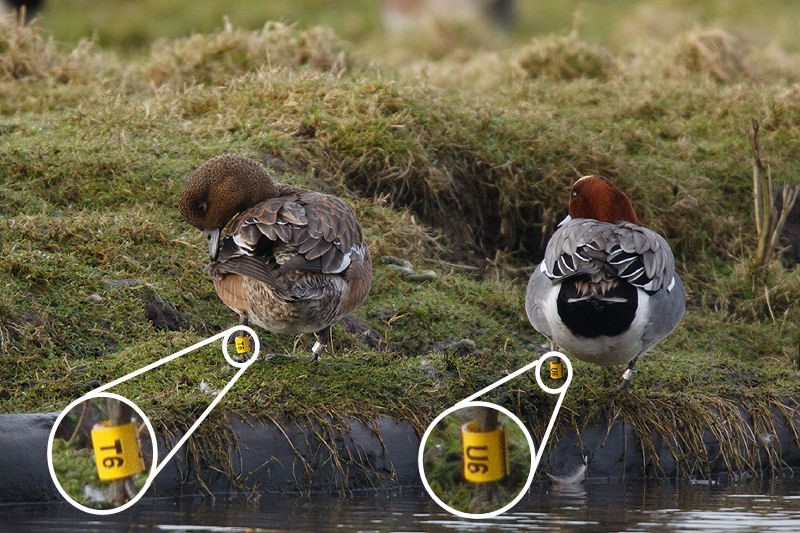