Colour-ringed Lesser White-fronted Geese observed in NW-Europe mainly originate from a reinforcement scheme in Sweden. From 1981 onwards, juveniles were released with their foster-parents, Barnacle Geese, to guide them to more safe wintering sites in the North Sea area. The reason for the Swedish reinforcement project was the long-term steady decline and the contraction of the breeding range of the species.

From the juvenile birds released after 1981, 250 were equipped with colour-rings. The last of these birds was reported in 2013/14 (081), and observed in the traditional wintering site at Oudeland van Strijen in The Netherlands. From 2010 onwards, birds have been ringed with a colourring with inscription on one leg and a metal ring or a combination of a plain colour ring and a metal ring on the other leg.

Lesser Whitefronts carrying combinations of plain colorings on one leg are to be reported to the Norwegian project at tomas@birdlife.no 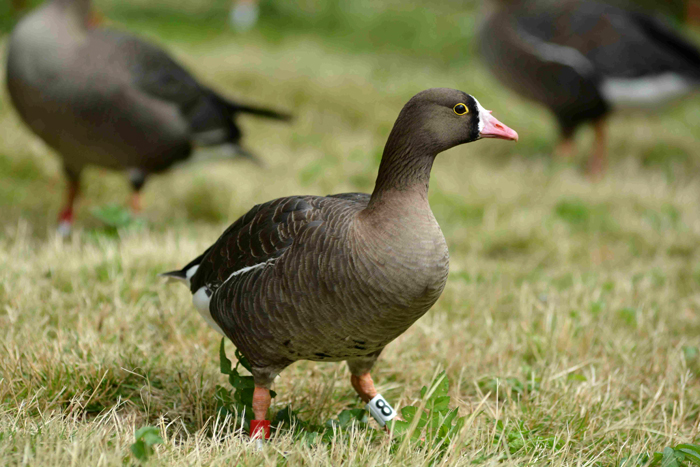 Lesser White-fronted Goose from the Swedish breeding program, which was released in 2014 (photo: Gerard Müskens)